Next to Jesus, the most important person who ever lived was Mary — the Blessed Mother. For Catholics, our love affair with her began over 2,000 years ago when an angel visited a young Jewish girl and told her that she had “found favor with God. Behold, you will conceive in your womb and bear a son, and you shall name him Jesus. He will be great and will be called Son of the Most High” (Lk 1: 30-31). Mary’s role in salvation history was fixed from that moment.

Catholic Christians, long before there were institutionalized devotions to Mary, sought ways to seek her intercession, endear themselves to and venerate this holy, pure woman. While those of us today — and those who went before us — esteem and venerate Mary, we never lose our focus on Jesus (Jesus through Mary). The Catechism of the Catholic Church reads, “What the Catholic faith believes about Mary is based on what it believes about Christ, and what it teaches about Mary illumines in turn its faith in Christ” (No. 487). The ardent love we show for her is exemplified in the Marian dogmas proclaimed through the centuries.

A dogma, described by various sources, is a teaching of the Church that has been revealed by God and a teaching to be held by all Catholics. A dogma is not a new belief, but it clarifies or defines a long-held conviction of the faithful. It often is referred to as a doctrine or article of faith that we all are expected to believe.

According to the Catechism, “The Church’s magisterium exercises the authority it holds from Christ to the fullest extent when it defines dogmas, that is, when it proposes, in a form obligating the Christian people to an irrevocable adherence of faith, truths contained in divine Revelation or also when it proposes, in a definitive way, truths having a necessary connection with these” (No. 88).

There are four Marian dogmas: that Mary is the Mother of God; her perpetual virginity; that she was immaculately conceived; and that she was assumed into heaven.

In these Marian dogmas, the Church never has taught that Mary is divine; in many ways, other than sin, she is like us. She toiled, laughed, cried and suffered in the manner of every man and woman; thus we easily relate to her.

As she was the spotless tabernacle carrying Our Lord, so we become his tabernacle at holy Communion; as she is the Mother of God, we are her children, the People of God. From conception she was preserved from sin and filled with God’s grace. At baptism our sins likewise are removed and we, too, are filled with grace.

Mary is our perfect intercessor in heaven; though we often fall short of her immaculate life, fall short of her extraordinary sanctity, she gives us hope and the confidence of eternal life. Pope Francis recently acknowledged the continuous, universal love affair we have with Our Lady when he established the Memorial of the Blessed Virgin Mary, Mother of the Church, as an annual feast day to be celebrated on the Monday after Pentecost. 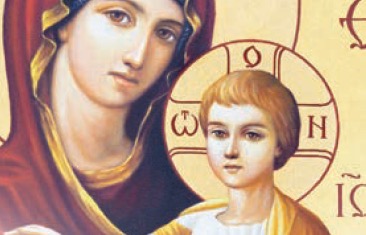 That Mary was a virgin before, during and after the birth of Jesus, a perpetual virgin, is a Marian dogma. In Luke, “The angel Gabriel was sent from God to a town of Galilee called Nazareth, to a virgin betrothed to a man named Joseph” (Lk 1:27).

The Sacred Scripture clearly identifies Mary as a virgin, and a virgin she wanted to remain. During the Annunciation, she gave her yes to Gabriel after he tells her that she will become a virgin mother through the power of the Holy Spirit and that her kinswomen Elizabeth, who is barren and beyond childbearing years, was six months pregnant. These are miraculous events, and the angel explains the miracles saying, “for nothing will be impossible for God” (Lk 1:37).

Mary will give birth through a supernatural act of God rather than through relationship with a man and thus her virginity remains intact. St. Justin Martyr in the second century wrote, “But the power of God, coming upon the Virgin, overshadowed her, and caused her, while yet a Virgin, to conceive.” God’s glory is magnified through the virgin birth of Jesus. When we contemplate his divinity and his glory, we quickly recognize the purity of the vessel that carried him in her womb.

She was the one “full of grace,” the chosen one who would give birth to the Word made flesh and, as such, committed herself to Jesus. Mary was destined to remain a virgin because of the special role God had given her. Her close relationship with God was similar to the intimate relationship God had with Abraham, with Moses, with David. In her canticle, Mary proclaims, “For he has looked upon his handmaid’s lowliness; behold, from now on will all ages call me blessed” (Lk 1:48).

Some argue that Mary had other children after Jesus, pointing to the Gospel according to Luke 1:7: “She gave birth to her firstborn son.” Firstborn son means the eldest son who has certain family privileges and inheritance rights. Firstborn males also belong to the Lord according to Exodus 13 and Luke 2:23, so therefore Verse 7 of Luke does not mean that Mary had additional children.

The Bible mentioning the brothers and sisters of Jesus has long been considered a reference to cousins, non-blood relatives or individuals spiritually close to the Holy Family. If Jesus had blood-related brothers and sisters, then he would be the son of Joseph. That Mary had no other children, that she was ever virgin, is further indicated by the words of Jesus from the cross: “When Jesus saw his mother and the disciple there whom he loved, he said to his mother, ‘Woman, behold, your son.’ Then he said to the disciple, ‘Behold, your mother.’ And from that hour the disciple took her into his home” (Jn 19:26-27). If Mary had other children, Jesus would have likely chosen one of them to care for his mother.

When an adult joins the Catholic Church, he or she hears many new words and names; one attention getter is “Mary Mother of God.” Such a name takes a little thought and even explanation. How can God have a mother? Well, if we believe that Mary of Nazareth gave birth to Jesus, and that Jesus is the Second Person of the Trinity, of the same substance as God, then calling her the Mother of God makes perfect sense.

Indeed that Mary was the Mother of God is found in the Gospel of Luke (1:39-45), describing Mary’s visit to Elizabeth. When Mary arrives, Elizabeth calls her the “mother of my Lord,” and then two verses later in the visitation story, Elizabeth makes it clear that she is talking about God, saying, “Blessed are you who believed that what was spoken to you by the Lord would be fulfilled.” Most early Christians regarded and honored Mary in this light, but certainly not all.

“The faith of the Catholic Church on the subject of the conception of Mary is this: that at the very instant, when God united the Soul of Mary, which he had created, to the body which it was to animate, this ever-blessed soul did not only not contract the stain, which, at the same instant defiles every human soul, but was filled with an immeasurable grace which rendered her, from that moment, the mirror of sanctity of God himself, as far as this is possible to a creature.”

The Church proclaims that Mary was never tainted with sin — that she was conceived in her mother’s womb without the stain of original sin, that she was born and lived without sin.

When the angel appeared to Mary (see Lk 1:28), saying to her, “Hail favored one!” (full of grace), it was not a promise of something in the future. He didn’t say, “You will be filled with grace or favored,” she was already so gifted; that is, she always was infused with divine goodness. The presence of God’s grace, God’s goodness denies even the possibility of evil. Mary was the tabernacle that carried Our Lord for nine months; thus, original sin or any sin could never stain her in the manner of other men and women. The document of the Second Vatican Council Lumen Gentium says, “Adorned from the first instant of her conception with the radiance of an entirely unique holiness, the Virgin of Nazareth is greeted, on God’s command, by an angel messenger as ‘full of grace'” (No. 56).

That Mary was assumed into heaven is the oldest of all the Marian beliefs and can be traced back to the Apostles, many who were alive at time of her passing. The term assumed, as used by the Church, means that when her life on earth ended, Mary did not suffer the decay of the grave but was taken into heaven by God. That her body did not corrupt in a tomb is in keeping with her role as the sinless, immaculate Virgin Mother of God. The Eastern Church calls her passing the Dormition of Mary (Latin for falling asleep) and began celebrating a feast by that name in the fourth or fifth century. By the seventh century the Western church added this feast and later the name was changed to the feast of the Assumption.

According to Cardinal John Henry Newman (1801-90), “By her assumption is meant that not only her soul, but her body also, was taken up to heaven upon her death, so that there was no long period of her sleeping in the grave, as is the case with others, even great saints, who wait for the last day for the resurrection of their bodies.”

Catholics traditionally commemorate the life of a saint on the anniversary of that person’s death. The first Christians would congregate at the tomb or site where the saint’s relics were buried and in special ways remember that individual. In the case of Mary, the holiest and most beautiful of all our saints, there is no clear evidence of how or when she died; no remains, no relics. Some historians think she died in Ephesus primarily because St. John lived there and cared for Mary as requested by Jesus from the cross. Other historians, probably in the majority, maintain that she died in Jerusalem.

Opening the Word: The feast of the Assumption