Living as a Catholic in Utah

The Cathedral of the Madeleine in Salt Lake City, Utah. Shutterstock

The state of Utah is widely and rightfully associated with the Church of Jesus Christ of Latter Day Saints. Nearly everything about the state’s settling by Westerners, its statehood, and much of its history is inextricably tied to the Mormon Church.

Yet the Catholic Church has been there since the beginning and continues to thrive in the Beehive State. In a state where the population is majority Mormon, it can seem like it would be nearly impossible to live there as a Catholic. But for many Catholics in Utah, this simply provides more opportunities for evangelization.

Most of the Catholic schools in the state of Utah are located near Salt Lake City. Most are within 15 to 20 minutes of each other, and of the 16 schools in the diocese, only three are about an hour from the city center. This allows Longe to communicate regularly with principals and to plan professional development opportunities that all of the teachers can attend. These 16 schools serve about 5,500 students, which is nearly double the number from about 20 years ago.

“When I used to take parents on a tour at my school, I used to say that ‘Our school is like a small town in a big city,'” Longe said. “Schools and parishes become small ‘neighborhoods’ for the Catholic community. Parents and students find and make lifelong friendships because they become involved with our schools.”

The population of Utah is around 3 million people, the majority of whom belong to the Church of Jesus Christ of Latter Day Saints. There are around 300,000 Catholics in the state, which makes them the second-largest faith group.

“Because we are such a minority, it is a challenge to find trained teachers and administrators who are Catholic,” Longe said. “This is a challenge for us, as principals are required to be a Catholic and any teacher who teaches religion needs to be Catholic.” This has become a particular challenge recently, as Utah is facing a teacher shortage. It is also a challenge to provide financing and scholarships in Utah, as with a smaller Catholic population there are fewer people to provide financial support.

“Like schools across the country, our Catholic schools are tasked with assisting parents in their role as the primary educators of their children, especially when it comes to their faith,” he said.

For Longe, operating Catholic schools in such a heavily non-Catholic region provides an opportunity for evangelization. Quoting the USCCB’s 2005 document “Renewing Our Commitment to Catholic Elementary and Secondary Schools in the Third Millennium,” Longe observes that, “Catholic schools afford the fullest and best opportunity to realize the fourfold purpose of Christian education, namely to provide an atmosphere in which the Gospel message is proclaimed, community in Christ is experienced, service to our sisters and brothers is the norm, and thanksgiving and worship of God is cultivated. When schools do this well, they are also powerful instruments of evangelization for our non-Catholic brothers and sisters.”

Magdalene Religious Goods is the only religious goods store in the Salt Lake City area. Opened in November 2013, the establishment has already become a staple of capital city life, having received Salt Lake Magazine’s Best of Salt Lake Award and City Weekly’s Best of Utah Award. For the owner, Jacque Smithe, living as a Catholic and operating a Catholic shop in Utah presents more blessings and opportunities than challenges.

“I don’t find it difficult to live my faith despite Utah being predominantly Mormon,” Smithe said. “I, rather, suspect that Catholics in Utah are perhaps stronger because of our status as not being predominant.”

“We are a strong bunch here in Utah,” she said. However, growing up as a Catholic did present a number of challenges. “We really didn’t know any of our neighbors, as they all belonged to the Mormon ward — and, of course, our family didn’t. There were parents who also discouraged their children from playing with non-Mormons.” Smithe was lucky enough to attend the parochial school, so she did not personally experience this issue, but said that many Catholic children — including her niece and nephew — who attend public school do often feel alienated.

Magdalene Religious Goods serves an eclectic clientele, being the only religious goods store in the area. “Many people find us interesting and different, so we don’t just see Catholics but all different religions,” said Smithe. “We even get a few Mormons who stroll in.”

Smithe strives to foster a welcoming atmosphere at Magdalene, with couches and free coffee and tea, as well as a prayer room where they ask visitors to leave prayer requests and obituaries, which is another opportunity to evangelize.

The atmosphere in much of Utah is different from most of the rest of the country. While much of the country is increasingly secularized, which makes faithful Catholics feel out of place and “other,” Utah is another story: very religious, but not in a traditional Christian sense.

Luke Stager went from Portland, Oregon — one of the bastions of secularism and the unchurched — to Utah as part of earning his master’s degree in teaching. First assigned to teach math and theology to juniors at St. Joseph Catholic High School in Ogden, Utah, for two years, he later applied to work at Judge Memorial Catholic High School in Salt Lake City. At Judge, he taught math and freshman theology and eventually became a campus minister. As campus minister, he organized the school liturgies and retreats, among other responsibilities. He has since returned to Oregon and is now a seminarian for the Archdiocese of Portland. 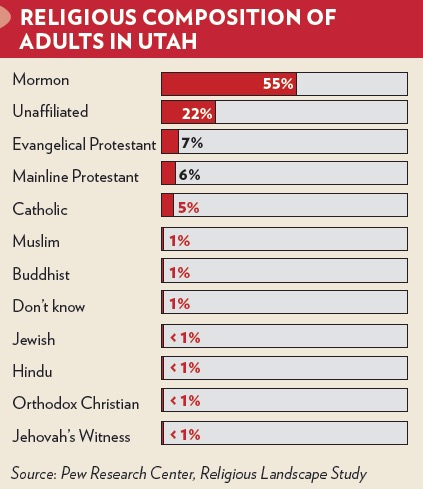 While in Utah, Stager saw many opportunities for evangelization, as well. He sang with the choir of the Cathedral of the Madeleine in Salt Lake City.

“The Cathedral of the Madeleine was a bastion of the arts and good liturgy,” he said, “which was a large ecumenical draw and was significant in developing relationships with the LDS Church through a common interest in a pursuit of the arts.”

Over the years, relations between Catholics and Mormons have been quite strained at times; however, great improvements have been made due to the dogged efforts of the leadership of both churches. This has, in large part, been due to a renewed common commitment to a pursuit of the arts, especially music. This is a common theme when exploring the relationship between Catholics and Mormons: Where is there common ground? And, on the other hand, what unique element can each bring to the table?

In spite of the major differences between Catholics and Mormons, and the insular nature of many Mormon communities, Stager did not feel like an “other” during his time in Utah — “at least,” he said, “not any more than I feel like an ‘other’ in pagan and unchurched Portland.” In Portland, he observed, being religious at all can seem very foreign, whereas in Utah it doesn’t seem foreign.

The makeup of the Church in Utah is affected by the culture of the state, including the exclusivity of many Mormon communities. “From a macroscopic perspective, life as a Catholic in Utah did not seem to me to be too different from life as a Catholic in Portland,” Stager said. The largest difference, in his experience, is that there are markedly fewer young Catholics — that is, college age and young adults — in Utah. Most Utah natives go out of state for college, and few Catholics come to the state to study, he said.

“One thing I noticed as a Catholic high school teacher was that the students were more resistant to what they perceived as being overly religious,” Stager said. “I think the kids associate piety and high levels of devotion with Mormons, and they generally wanted to distance themselves from that.”

While the trends observed and experienced by these individuals may not be universal, they speak to the overall culture in the state of Utah.

Tags:
Previous Article
Opening the Word: The other signs
Next Article
Mercy for sale?
Advertisement
Advertisement